“Mommy, why didn’t Santa bring me anything for Christmas?”

My four-year-old son’s voice in the back seat caught me by complete surprise. And nearly broke my heart.

I thought we had made it successfully through another Christmas avoiding the whole Santa issue. Apparently not.

It’s not that we’re anti-Santa.  My husband and I both grew up believing in Santa and had good memories. We didn’t grow up thinking our parents could never be trusted. We didn’t believe our parents lied to us. We didn’t have any heartbreak on the discovery that Santa was Mom and Dad. We weren’t confused about Jesus being real because we were told Santa was.

But there was just something in me that didn’t feel right about doing Santa with Drew. I couldn’t shake it. I wasn’t dogmatic about it and did not look down on my multitude of friends who chose to do Santa. My feelings on the matter were unexplainable. Finally I just accepted that perhaps God was giving me that uncomfortable feeling for some reason that was specific to my family, even specific to Drew. I decided to trust that instinct even if I didn’t understand it.

We still watched Santa cartoons and had a few decorations of Santa in our house. We treated Santa like we treated Mickey Mouse – a fictional character with a fictional story, although we did share the account of the real Saint Nicholas. When Christmas morning came, Drew didn’t even bring up Santa because he didn’t care where the presents came from.

But avoiding the perception of a real Santa was difficult. Well-meaning adults constantly asked Drew, “What is Santa going to bring you for Christmas?” I had been successful in blowing those conversations off, until that moment in the car.

I was actually surprised at what came out of my mouth in response. I hadn’t practiced it or even thought about it beforehand. But before I knew it, out it came.

“Drew, you know that we celebrate Jesus at Christmas, and there’s a big difference between the stories you’ve heard about Santa and about Jesus. You’ve heard that you have to be “good enough” to get presents at Christmastime from Santa. But that’s opposite of what Jesus came for. We could never be good enough to get to Heaven, no matter how good we are. And we don’t have to be “good enough” for Jesus to love us. Jesus loves us even though we do bad things, and he came to the world to take our punishment so we could go to Heaven as long as we accept his free gift.”

I then reminded Drew of the presents he received on Christmas morning and how he received the same presents as the other boys and girls.

That seemed to satisfy him. I don’t know how much penetrated his 4-year-old heart, but I do know that he has never truly questioned it since.

I share this story because I meet parent after parent who have similar uneasy feelings about Santa. If that’s you, I want you to know you’re not alone. Pray about it. Don’t just do Santa because it’s what’s expected. But don’t “not” do Santa because anti-Santa has seemed to become a more popular thing to do of late. Being prideful about the choice you make is worse than the choice itself, in my opinion. You never know when your viewpoint might change, after all.

Last year we went to a Live Nativity and in a corner sat Santa. Alyssa, 3, ran to him with such wonder in her eyes and sat on his lap with reckless abandon. Seeing her reaction – and knowing we had never introduced Santa to her either – taught me another lesson. Sometimes things are black and white. But sometimes they’re not. What might be right for one kid might not be right for another.

Alyssa is a dreamer with a vivid imagination. If she takes Santa and runs with it, I will probably adopt the “Santa Secret” for her. (I really wish I had known about this idea when Drew was little. It would have avoided so much distress! If you’re looking for an option that falls between Santa overkill and Santa boycott, I highly recommend reading this article from Jen Wilkin).

Just as I don’t look down on anyone who does Santa or anyone who foregoes the commercialized Christmas celebration altogether, I hope to receive the same grace in return. Parenting is hard enough. Let’s support each other with grace and humility.

Now Available!  Glory in the Garden: 31 Days of Devotionals. To get your free copy, click here. 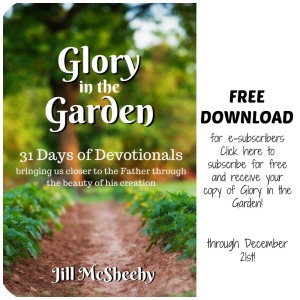 *Note about this post: If you’re new to this blog, please know that I don’t make a habit of writing about emotionally-charged topics. My intention is never to stir controversy or incite division but instead I endeavor to share in a transparent way how I seek to navigate life and real issues through my faith in God and trust in his word. I’m sure someday I’ll see how I should have done this or that differently, but for now, I share my journey, no matter how on track or off it might turn out to be. My hope is that it may encourage you as you travel on your own journey with God.

One thought on “The Whole Santa Thing. And why we should extend grace to those who do it differently.”